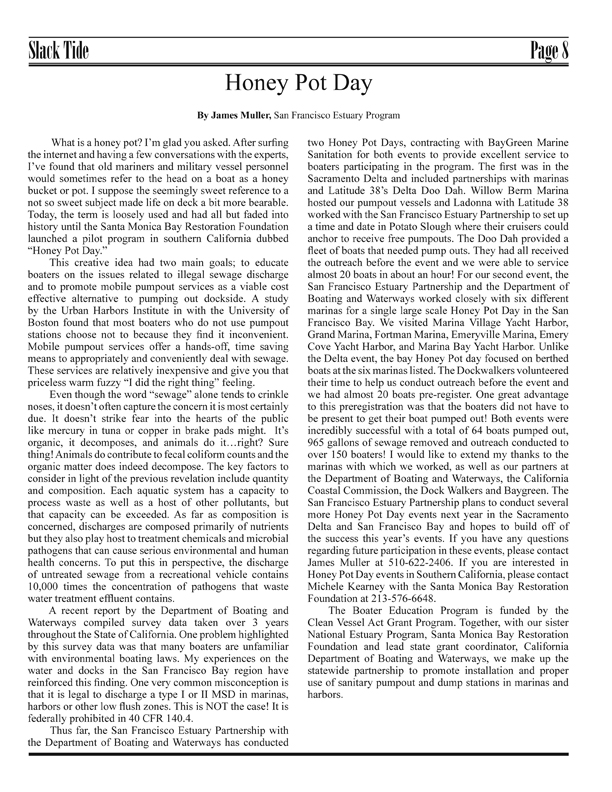 What is a honey pot? I'm glad you asked. After surfing the internet and having a few conversations with the experts, I've found that old mariners and military vessel personnel would sometimes refer to the head on a boat as a honey bucket or pot.

I suppose the seemingly sweet reference to a not so sweet subject made life on deck a bit more bearable. Today, the term is loosely used and had all but faded into history until the Santa Monica Bay Restoration Foundation launched a pilot program in southern California dubbed Honey Pot Day.

This creative idea had two main goals; to educate boaters on the issues related to illegal sewage discharge and to promote mobile pumpout services as a viable cost effective alternative to pumping out dockside. A study by the Urban Harbors Institute in with the University of Boston found that most boaters who do not use pumpout stations choose not to because they find it inconvenient.

Mobile pumpout services offer a hands-off, time saving means to appropriately and conveniently deal with sewage. These services are relatively inexpensive and give you that priceless warm fuzzy I did the right thing feeling.

Even though the word sewage alone tends to crinkle noses, it doesn't often capture the concern it is most certainly due. It doesn't strike fear into the hearts of the public like mercury in tuna or copper in brake pads might. It's organic, it decomposes, and animals do it . . . right? Sure thing! Animals do contribute to fecal coliform counts and the organic matter does indeed decompose.

The key factors to consider in light of the previous revelation include quantity and composition. Each aquatic system has a capacity to process waste as well as a host of other pollutants, but that capacity can be exceeded. As far as composition is concerned, discharges are composed primarily of nutrients but they also play host to treatment chemicals and microbial pathogens that can cause serious environmental and human health concerns.

To put this in perspective, the discharge of untreated sewage from a recreational vehicle contains 10,000 times the concentration of pathogens that waste water treatment effluent contains.

A recent report by the Department of Boating and Waterways compiled survey data taken over 3 years throughout the State of California. One problem highlighted by this survey data was that many boaters are unfamiliar with environmental boating laws. My experiences on the water and docks in the San Francisco Bay region have reinforced this finding.

One very common misconception is that it is legal to discharge a type I or II MSD in marinas, harbors or other low flush zones. This is NOT the case! It is federally prohibited in 40 CFR 140.4.

Thus far, the San Francisco Estuary Partnership with the Department of Boating and Waterways has conducted two Honey Pot Days, contracting with BayGreen Marine Sanitation for both events to provide excellent service to boaters participating in the program.

The first was in the Sacramento Delta and included partnerships with marinas and Latitude 38's Delta Doo Dah. Willow Berm Marina hosted our pumpout vessels and Ladonna with Latitude 38 worked with the San Francisco Estuary Partnership to set up a time and date in Potato Slough where their cruisers could anchor to receive free pumpouts. The Doo Dah provided a fleet of boats that needed pump outs. They had all received the outreach before the event and we were able to service almost 20 boats in about an hour!

Unlike the Delta event, the bay Honey Pot day focused on berthed boats at the six marinas listed. The Dockwalkers volunteered their time to help us conduct outreach before the event and we had almost 20 boats pre-register. One great advantage to this preregistration was that the boaters did not have to be present to get their boat pumped out! Both events were incredibly successful with a total of 64 boats pumped out, 965 gallons of sewage removed and outreach conducted to over 150 boaters!

I would like to extend my thanks to the marinas with which we worked, as well as our partners at the Department of Boating and Waterways, the California Coastal Commission, the Dock Walkers and BayGreen.

The San Francisco Estuary Partnership plans to conduct several more Honey Pot Day events next year in the Sacramento Delta and San Francisco Bay and hopes to build off of the success this year's events. If you have any questions regarding future participation in these events, please contact James Muller at 510-622-2406. If you are interested in Honey Pot Day events in Southern California, please contact Michele Kearney with the Santa Monica Bay Restoration Foundation at 213-576-6648.

The Boater Education Program is funded by the Clean Vessel Act Grant Program. Together, with our sister National Estuary Program, Santa Monica Bay Restoration Foundation and lead state grant coordinator, California Department of Boating and Waterways, we make up the statewide partnership to promote installation and proper use of sanitary pumpout and dump stations in marinas and harbors.